Posted in Boston area
Author: Jeremy Solomons  Published Date: May 20, 2019  Leave a Comment on Origins of the Name Jamaica Plain 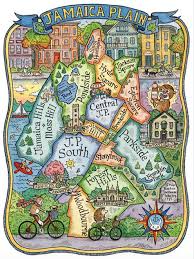 We are now living in JP (Jamaica Plain) a neighbourhood of Boston. Here is how it got its name:

In the late 17th century, the name “Jamaica” first appears for the area of Roxbury between Stony Brook and the Great Pond. There are a number of theories regarding the origin of the name “Jamaica Plain”. A well-known theory traces the origin to “Jamaica rum”, a reference to Jamaican cane sugar’s role in the Triangle Trade of sugar, rum, and slaves. Another explanation is that “Jamaica”, though a different letter “A” pronunciation, is an Anglicization of the name of Kuchamakin, who was regent for the young Chickatawbut, sachem (chief) of the Massachusett tribe.

On some maps, until the mid-19th century, the area was marked as “Jamaica Plains”.