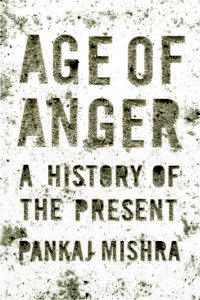 It is more than time for all of us to think about the flaws in the worlds we believe in, the worlds we are trying to achieve, and the worlds we inhabit.  Our dream worlds admit everyone, nor do they acknowledge the pain we have caused and continue to cause for the lifestyles we live.  Mishra’s Age of Anger  does some of the work, but he misses in many ways. He focuses on thinkers as representative of times and the actors in those times. The driving force of many of his ideas is Rousseau.  He also tends to lump together the angers of Trump voters, Brexiteers and ISIS in a way that is too glib.  Many of you have well thought out arguments about these topics, and Mishra will prompt you to resurrect those.

Franklin Foer in the New York Times:
Liberalism has no choice but to sincerely wrestle with its discontents, to become
reacquainted with its moral blind spots and political weaknesses. Technocracy —
which defines so much of the modern liberal spirit — doesn’t have a natural grasp of
psychology and emotion. But if it hopes to stave off the dark forces, it needs to grow
adept at understanding the less tangible roots of anger, the human experience
uncaptured by data, the resentments that understandably fester. A decent liberalism
would read sharp critics like Mishra and learn. 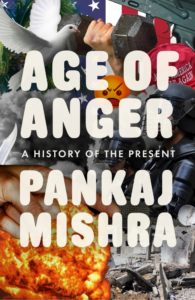 Richard Evans in The Guardian:
Of course it is right to point to the downside of “modernisation”, however the term is conceived: in particular the violent and sometimes genocidal impact of European imperialism on other parts of the world in the 19th century, and the poverty and exploitation engendered by industrialisation. If 19th-century Europe was generally peaceful, its peace was punctuated by episodes of extreme and bloody violence. But history is a many-sided phenomenon. It cannot in the end be made to serve the interests of explaining the present through the vast and questionable arguments Pankaj Mishra puts forward in this thought-provoking book.