I have been reading Fortune Magazine’s The Broadsheet on a daily basis for work, and its focus on the world of business from a woman’s point of view has been very useful in showing up the natural biases that we all have.  The Broadsheet directed me to the article below in The Atlantic, the day after engaging in a discussion about the fact that Boston, Cambridge, and my home town of Brookline didn’t get one female candidate for their superintendents’ jobs.  It seemed that there had to be a way they could find those candidates, but apologists, were just saying no qualified women applied and there are studies that women don’t want to be school superintendents.  To me that indicates a much bigger issue that is not being addressed–it’s too easy just to say, no one applied.

I can be as self-righteous as the next person, and I haven’t done the sort of survey that Adrienne Lafrance @AdrienneLaF  has done and written about.

“Every time I write something about diversity in Silicon Valley, and the gross disservice that today’s tech giants are doing to women and people of color by consistently overlooking them for jobs and promotions, I get comments to this effect: What about the pipeline problem? Less than one-fifth of computer science graduates are women. It’s not Google’s fault it can’t find qualified women to hire.

To which I say: Pleeeease.

So, okay, yes, colleges and universities need to do more to make computer science programs inclusive, but that doesn’t let off the hook the most powerful tech companies on the planet for saying one thing and doing another. 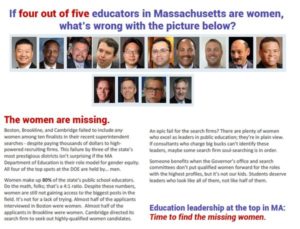