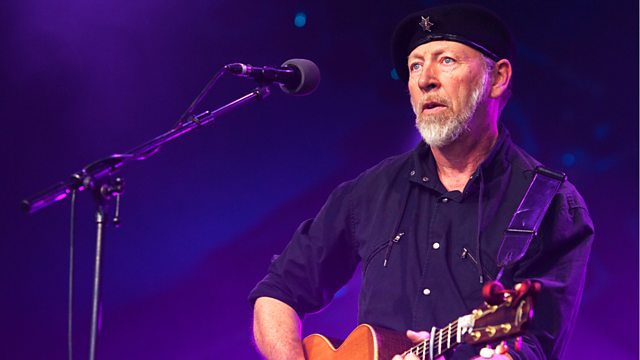 Personal portrait of the critically-acclaimed and enigmatic British folk rock singer Richard Thompson, providing an insight into his fascinating life alongside exclusive footage. Contributors include Billy Connolly, Bonnie Raitt, ex-wife Linda Thompson, Harry Shearer and Richard’s wife Nancy Covey. The documentary visits him at home in both London and Los Angeles – the first time such intimate access has been granted to this private and complex artist.

In the 60s whilst still a teenager, Thompson wrote generation-defining songs like Meet on the Ledge. As founder member of Fairport Convention, as a duo with then-wife Linda and more recently as a solo artist, Thompson’s unique mix of rock and traditional music has ironically become more popular now in America than in the UK.

Richard and Linda Thompson’s songs of spiritual yearning culminated in their becoming Sufi Muslims. Alternative living and devotional music gave way to the 80s success Shoot out the Lights. Good fortune coincided with the duo’s messy divorce, painfully played out on their legendary US tour. The documentary captures this tension and highly-charged atmosphere with exclusive footage recorded at one of the last concerts by a fan in America, which has never been seen on television before.

Since then Richard’s solo career has burgeoned, especially in America, with such resolutely English-themed songs as Vincent Black Lightning 1952, celebrating a classic British motorbike. As well as featuring powerful performances of songs such as Over the Rainbow and A Heart Needs a Home, the documentary includes Solitary Life and Kidzz, neither of which appear on his recent album The Old Kit Bag. From:  BBC Website